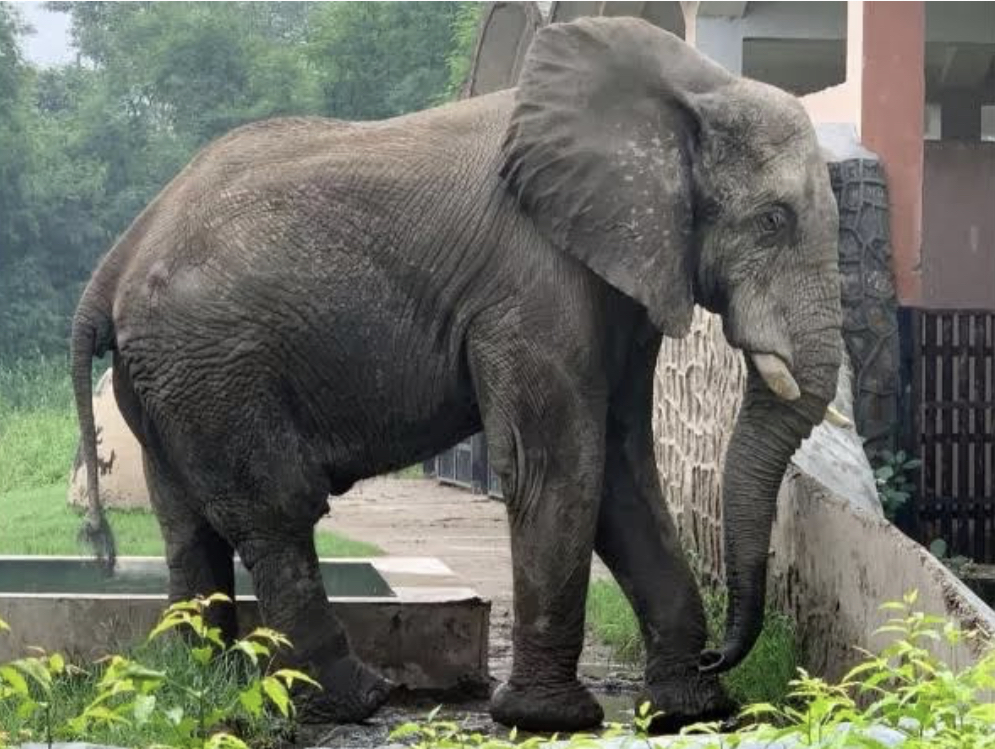 In 1998, a twenty-six-month-old male Africa elephant was presented as a diplomatic gift by Zimbabwe to India, he was named Shankar after India’s 9th President,  Dr Shankar Dayal Sharma. For twenty-four years Shankar has lived at the Delhi Zoo, in inadequate conditions, and where it is reported, that he is kept in chains for up to seventeen hours a day.  He displays stereotypical behavior which indicates he is suffering from stress, boredom and anxiety.

On the 4th of October 2021, the founders of an organization called Youth for Animals, Nikita Dhawan and Nandika Karunakaram, delivered a comprehensive letter to Mr Ramesh Kumar Pandrey, the Director of the National Zoological Park.

The authors of the letter concluded that the “present state and status of Shankar is nothing short of illegal imprisonment and as an autonomous self-determining nonhuman, Shankar is entitled to immediate release from the unlawful imprisonment.” The authors suggested that Shankar be released and relocated in the wild preferably in Africa, or to a wildlife sanctuary where there is a strong presence of African elephants or they suggested that Shankar be relocated to the Mysuru Zoo where he would have the opportunity of companionship of another African elephant.

The Youth for Animals initiative to free Shankar was publicly supported by the Federation of Indian Animal Protection Organizations (FIAPO), the Pro Elephant Network (PREN), the Elephant Specialist Alliance International (ESAI) and World Animal Protection India.  These letters of support were included in a document which was delivered to the Prime Minister of India on the 16th November 2021.

Aspinall Foundation in the United Kingdom submitted a letter of commitment, after they were approached by Youth for Wildlife, with regard to the proposed rehabilitation, translocation and re-integration of Shankar into a natural wild system.  Aspinall Foundation has suggested and agreed to fund an independent specialist veterinarian team to examine Shankar. Furthermore, based upon the recommendations of the veterinarian team a suitable, natural sanctuary is located for Shankar, where he can be rehabilitated under the guidance of experts.  Aspinall Foundation has offered to fund this process in its entirety.

The Youth for Animals organization received no response to the aforementioned communications and thus filed a Public Interest Litigation in the Delhi High Court which was heard on the 3rd of January 2022.

Thereafter the case was officially admitted and the Respondents were ordered to consider the representation.  The first hearing was held on the 6th of July 2022.  The division bench of Chief Justice Satish Chandra Sharma and Justice Subramonium Prasad instructed an inspection of Shankar and his living conditions and the submission of a detailed report by the Central Zoo Authority and the Animal Welfare Board of India.

The judges were not in favour of relocating Shankar outside of India, they asked the authorities to explore the possibility of importing another African elephant, preferably a female of the same age group.

The Delhi Zoo did not officially file the inspection report on the 31st August 2022, as instructed by the Hon’ble court. The zoo has been given an ultimatum to complete the report, the next court date is 20th of September 2022.

The Members of the Pro Elephant Network have prepared a statement addressed to Ms Nikkita Dhawan to be presented in the High Court on the 20th September 2022.